When my family emigrated from Europe 63 years ago, they were educated, but working class, neither rich nor poor, seeking the post war riches in the Americas.  They chose to go South.  They boarded the transatlantic ship with a suitcase each and two half-full 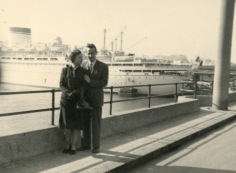 wood and metal large steamer trunks, containing their good clothes (including socks, stockings, shirts and blouses, underwear and nighties) and their everyday clothing, their good shoes, comb, hairbrush and other personal items, photographs of their deceased fathers, a two-tome encyclopedia, tools for the trade they were going to set up in their new country, important documents, money in envelopes.

When they emigrated a second time, this time to go North , they had a child, and two full trunks and a suitcase each.  They were wealthy, but wanted to live in a safer environment in which to bring up their child.  They had more good clothes and more good shoes, their personal belongings and more photographs, and now their child’s books.  But the art, the fine and everyday china and all other belongings were left behind.  They did not quite leave stuff behind.  The things they left were identifiable.  The painting by so-and-so, the German- made couch, the Grundig radio and turntable, the Italian damask linens, and so forth.  When they boarded the airplane, they had each a suitcase.

I live in a city of about 1 million population: there are in excess of 50 storage facilities ranging from a few storage units to multiple storey buildings.  Of course, there is a legitimate need for these storage facilities (diplomats, armed forces personnel, in-between houses, warehousing), but it seems that in the past decade these facilities have multiplied and there does not seem to be an end to their proliferation.

So why the need to store things?  What are these precious things that we cannot part with yet we have no room for?  We tend to generically name them stuff.  We buy stuff, we store stuff; we get rid of stuff, we donate stuff.  We no longer live in the household with one set of fine china, but two, or three; no longer just one or two Sunday outfits, but a closet full; not one wristwatch, but several.  Of course, we live in a consumer society, where spending keeps the economy going, which keeps us in the comfort we enjoy.  I have no issue with any of this.  But then from the East come Danshari, KonMari, methods for decluttering, and reorganizing. A call to return to a minimalist life, a more serene self. Something to consider, something in my to-do-list.

My father had rented additional storage space in the condominium where he and my mother lived.  It was full of his stuff.  When he died, at 79, we threw it all away and kept the shelving units.  When my mother died, at 88, she did not have stuff.  She had two file folders with important documents, a few good clothes, the jewelry my father had given her, one set of good china, two photo albums, a pair of baby booties and matching blanket, and the book she was reading.  It all would have fit in one trunk.

I often wonder:  how many trunks would I have, were I to leave tomorrow?

Of three cultures, I belong to none but embrace them all. View all posts by luigina1r2t